Delhi Police have now confiscated clothing that belonged to Shraddha Walkar and Aftab Amin Poonawalla as part of their ongoing investigation into the murder of Shraddha.
As part of their investigation into the terrible murder, a team of Delhi Police reportedly went to Aftab’s apartment in the Chattarpur neighborhood of Delhi and seized clothing that belonged to both the accused and the victim. 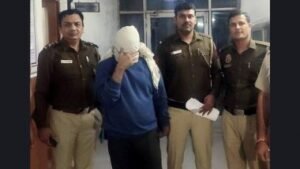 “All of the household’s clothing has been seized. The majority of the clothes belonged to Aftab, according to police sources, who also stated that the clothes would be sent for forensic analysis.

However, Aftab and Shraddha’s clothing from the day of the murder has yet to be found by the police.

On Friday, a police squad went to Aftab’s place of employment in Gurugram and thoroughly searched for the tool that Aftab had used to chop off Shraddha’s body. The area was also searched using metal detectors.

The police squad apparently discovered a small cutting tool during the search, even though no tangible proof was located.
The tool did not appear to be the one used by the accused, but sources stated that the search was done as part of the inquiry to retrieve the victim’s clothes and weapon.
According to Delhi Police, the suspect was detained on November 11 and placed in custody for five days before having his detention extended for a further five days on November 17. “So far, the Crime Team and specialists from FSL, Rohini have extensively examined the accused’s rented residence in the Chattarpur region within the boundaries of Mehrauli police station. Numerous exhibits have been taken from the location, according to a statement from the police.
According to the police, many combing operations have so far been conducted at various locations, including some wooded areas, from which severed bones have been retrieved.

In the course of the Shraddha Murder Case inquiry, the accused will also undergo a narco-analysis test, according to officials.

To recreate the lives of the accused and the deceased together, several teams of Delhi police have camped outside the city.

The police stated that “similarly, numerous teams are conducting search operations to recover the missing skeletal remains” and added that numerous inter-disciplinary teams are also working around the clock to document, identify inconsistencies, and further clarify the versions and the justifications offered by the accused.

On November 10, Delhi Police got a complaint from Shraddha’s father and filed an FIR. Aftab Poonawala killed Shraddha on May 18 and afterward began planning to dispose of her body, according to a Delhi Police investigation.

He admitted to reading up on human anatomy to aid him in hacking off the body when he spoke to police.

Police claimed that Aftab wiped the blood stains from the floor with some chemicals and threw away the ruined clothing after conducting a Google search.
He moved the body into the restroom before going to a neighboring store to purchase a refrigerator. The body was later sliced into little pieces and placed in the refrigerator.