11-year-old boy dies and another injured after Bus Depot Compound Wall Falls on Them in Palghar, Maharastra 11-year-old boy dies and another is injured after Bus Depot Compound Wall Falls on Them in Palghar, Maharastra

Contents hide
1 11-year-old boy dies and another is injured after Bus Depot Compound Wall Falls on Them in Palghar, Maharastra
2 Share your thoughts about the incident in the comment section below
3 Also, see

According to authorities, an 11-year-old boy dies and a teenager was hurt after a portion of the compound wall of a bus station collapsed on them in Jawhar in the Palghar district of Maharashtra. 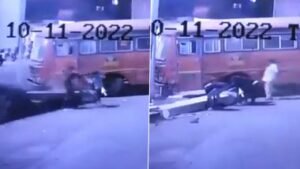 An official reported that the incident happened on Thursday at about 8.30 p.m. when a bus traveling in reverse hit a wall.

“When the bus struck the Jawhar depot compound wall while the driver was reversing, a section of the wall collapsed onto people who were nearby. A 15-year-old boy was hurt in the incident, while an 11-year-old boy died “According to Jawhar police station inspector Sudhir Sankhe.

According to him, the youngsters had traveled to Jawhar from Gujarat’s Rajkot to visit their family.

He added that no arrests have been made yet and that the deceased boy’s body was sent to a government facility for a post-mortem while the injured were receiving care.