Contents hide
1 10 Strange Foods Available In Different Parts Of India
2 Which one will be your first choice among these top 10 Strange Foods that are available in India? Comment down below
3 Also, see

India is a country with its own culture, and people of various ethnicities live there. We Indians have too much of everything, from traditions to festivals to food. Food plays an important role in our culture because it allows us to better understand our roots and culture. When it comes to food, however, some items are strange and only available in India.

Jadoh – This dish is popular among the Jaintia tribe of North East, Meghalaya. Rice is cooked with pig or chicken blood and entrails. It’s similar to a traditional Pulav, but with blood and intestines. Phan Pyut-Vegetarians, you probably didn’t expect to find many vegetarian options here. Well, there is one (unfortunately)! The majority of Indians eat potatoes as part of their daily diet. It’s the same with this dish, which is common in North East Indian cuisine. The potatoes, on the other hand, are rotten. If you ask them why they’ll tell you it’s because it’s delicious. This one is probably at the top of the list of 10 Strange Foods that people eat despite the fact that the main ingredient is rotten!! Eri Polu– Here in Assam, silkworm pupae are a much-loved delicacy. The Eri silkworm is used after it has spun its cocoon. It is usually served with Khorisa, a dish prepared from fermented bamboo shoots. Baby Shark Curry-This one took me completely by surprise, which is why it had to be included in the list of strange foods in India. If you visit Goa, you will discover that this is a must-try dish. Think of it as you would any other fish. This is one curry that won’t be cheap because it’s hard to come by and also because the locals love it. Who these days is afraid of sharks? 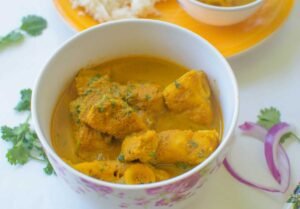 Frog legs-This exotic delicacy can be found in the cuisines of Goa and Sikkim. The Lepchas community in Sikkim considers battered and fried frog legs to be extremely medicinal. It is said to have helped people with dysentery and other stomach problems. And no, after eating it, you won’t start jumping around like frogs. Paya-Paya is an Indian word that means “feet” in Hindi or Urdu. It’s a curry made with the hoofs or trotters of animals like goats, lambs, buffaloes, and cows. These strange Indian foods contain less meat, but the fats and tissues are said to have a distinct flavor. It was traditionally slow-cooked over coal for hours, usually overnight. Sorpotel– If you still haven’t had your fill of pigs, here’s another Goan delicacy to try. This dish, like many other Goan delicacies, has Portuguese written all over it. Pork offal is used to make sorpotel. In simpler terms, this strange Indian food is made from a pig’s internal organs and entrails, which would otherwise be discarded. Rat Meat– Rat meat is served as a delicacy in Bihar restaurants as a roasted rat or rat curry. Bihar is considered one of India’s backward states, but it is culturally rich. In Bihar and Jharkhand, rat meat is known as ‘Patal Bageri’ by the Musharar community. Doh Khlieh– Another Meghalayan has made it onto the list. If you’ve ever had pork and onion salad, you’ll recognize this dish. However, there is a catch: the garnishing that comes with it. This unusual Indian dish is topped with steamed pig brain; yes, you read that correctly. If that doesn’t qualify for a list of strange foods in India, we’re not sure what will. Mudiya– Siri, or Mudiya as some called it, refers to the head of any goat. It is a very popular and unusual food in India, mostly consumed in the north. It’s also a traditional dish. To begin, roasting a goat’s entire head on a traditional ‘Chulha’ (stove) makes it simple to remove the skin and hairs after cutting them into pieces to cook. This dish has a strong petrichor flavor. Mudiya is also one of the 10 Strange Foods that you should try once. Which one will be your first choice among these top 10 Strange Foods that are available in India? Comment down below 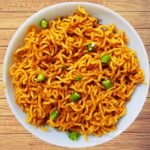