The official tourism season in India begins in October when the weather turns cool and pleasant across the country and lasts until the end of March. Tourists flock to the best of the greatest travel destinations in the country with their families and friends for vacations beginning this month. If you have similar ideas, we recommend checking out our list of 10 Best Places To Visit In October. Ziro is a small town in eastern Arunachal Pradesh that is ideal for an offbeat vacation. Ziro is largely populated by the Apa Tani Tribes and is surrounded on all sides by hills with lush green paddy fields in town. If you missed the Ziro music festival in September and want to see what all the fuss is about, the October vacations are the best time to go, as the rainy season is finished and the winters are just getting started. Hampi in Karnataka, a UNESCO World Heritage Site, is known for its remains of monolithic constructions, temples, and monuments. It was previously home to the old Vijaynagar Kingdom. These historic temples’ Hindu architectural style is worth seeing, notably Virupaksha Temple, which is dedicated to the kingdom’s patron god. If you’re looking for some peace and quiet and enjoy visiting historic structures, this is the city for you. Puri, Odisha, is home to the ancient Jagannath Temple, which is considered one of the country’s holiest sites. Throughout the year, millions of devotees flock to this hallowed city to pay their respects at the temple, and October is no exception! Coming here this month, however, can be a fantastic decision because the weather is favourable at this time of year, making touring and spending quality time at the Puri Beach much more delightful. This is one of the 10 Best Places To Visit In October. Darjeeling, often known as the “Queen of the Hills,” is a joy. With so much to see and do, a long vacation in October is required to really appreciate its splendour. As the monsoon fades in September, Darjeeling flowers in the fall, making it one of the greatest locations to visit in India in October. This place has it everything, including monasteries, national parks, valleys, soaring mountains, a rock garden, toy train, Observatory, and colonial buildings, and it looks especially stunning in the fall. Take a trip this October! Goa, located on India’s west coast, is one of the country’s smaller states, famed for its beautiful beaches, delectable cuisine, and Portuguese heritage. Panjim, Goa’s capital city, is well-connected with an international airport, as well as highways and railways that go from the north to the south. Because of the pleasant weather and the start of the peak season in the state, it is one of the best places to visit in India in October. Nainital is one of India’s most beautiful hill stations, and it’s one of the greatest places to visit in October. In October, the weather is mild, and the sunsets over the lakes are breathtaking. Beautiful lakes are surrounded by lush mountains and temples, making it a photographer’s dream. This popular honeymoon destination is named after the Goddess Naina. Boating, walking, and horseback riding are just a few of the activities available. It also features a fantastic market known for its woodwork, handicrafts, and scented candles. Munnar, an exquisite hill resort known for its tea estates, unique lush foliage, and jagged peaks, is located in Kerala’s the Western Ghats. Some of the world’s largest tea farms have their commercial headquarters here. Munnar also includes a number of protected areas where endemic and endangered species such as the Nilgiri Thar and the Neelakurinji can be found. Due to its pleasant environment, it is one of the greatest spots to visit in South India in October. Jaisalmer, which guards India’s western border, is much more than a tourist destination. The beautiful yellow stone Sonar Quila, also known as Living Fort because it is still home to over 4000 people, the enormous sand dunes, and the ghost settlement of Kuldhara are the main attractions of the Golden City. This city in Rajasthan has an unmistakable rustic beauty that demands a visit at least once in a lifetime. Rishikesh, along with its twin city Haridwar, is one of India’s most outstanding adventure centres, as well as a major religious centre. Holidays in October are a good time to visit Rishikesh if you want to enjoy bungee jumping or river rafting before the weather becomes too cold. 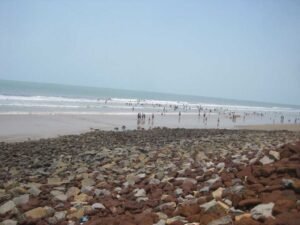 Digha Beach, West Bengal‘s most picturesque beach, is a popular weekend retreat from Kolkata. Digha boasts languid afternoons and beautiful nights in October when the summers and monsoons end and the weather improves. Spending the weekend in Digha after the Durga-Puja festivities in September-October could be a terrific way to unwind.

Which one will you choose among the 10 Best Places To Visit In October? Comment down below